Apologies to all for the lack of post. Been busy at work, and even weekends are packed with activities. Finally a midweek to take a breather and write about the toys. Will chalk up more posts before the crazy 2014 comes

This week, I would like to feature none other than Brian Donelly, also known as KAWS. His biography can be found here. His early works as a graffiti artist gave him a huge stepping stone to where he is currently. Picture courtesy of Art Crimes and the artists

Picture courtesy of All Design Toys

Shortly, in 2003, Medicom released the a-nation x KAWS Chompers be@rbricks  at 5019 yen for set of 100%+400% and 13800 yen for 1000% (wipe your tears away, I understand). Along with KAWS Mickey, they are some of the most sought after by collectors even till today. Though the value have somewhat reached its ceiling, buying and selling of these be@rbricks are still on a considerable volume. 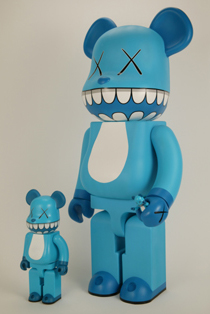 Do consider a reasonable price when purchasing them. 400% is going for <US$450, and 1000% <US$1200 before shipping. Yes, these are collectors’ items but anything more would be a rip off and I strongly discourage that, no matter how mint the condition might be.

Alright back to the bears.

KAWS then collaborated with Nexus VII (why them? lol) on the first ever wooden be@rbrick produced in 2005. I have seen them for myself years back and could not afford them back then. These babies are worth a few grand now, but maintenance can be a hassle too.

It was at the Be@rbrick Worldwide Tour back in 2005 (same event as the release of the wood be@rbrick), Medicom decided to announce the birth of… OriginalFake. They will be covered in the next post.

Have a great week!